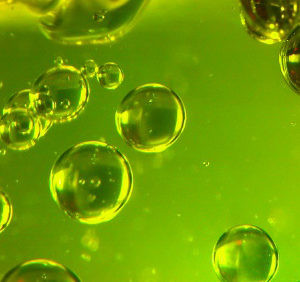 OLIVOIL AVENATE EMULSIFIER® is a non-ethoxylated, vegetal derived surfactant that combines the unique fatty acid profile of olive oil with the characteristic affinity of hydrolyzed wheat proteins toward the skin surface. The result is a new emulsifier structure with high skin compatibility and maximum biodegradability.

OLIVOIL AVENATE EMULSIFIER® is based on Olivoyl Hydrolyzed Oat Protein, a lipo-amino-acid with a fatty amide structure, showing high inter-facial activity. It is obtained by condensation of one amino group of proteins and the carboxyl group of fatty acids of olive oil

In order to achieve an amphiphilic system suitable for the stabilization of O/W emulsions, this structure (called Olivoil Avenate) is combined in a balanced way with olive oil wax (mainly composed of Glyceryl Oleate and Glyceryl Stearate). The result is an ‘emulsifier base’ with an outstanding emulsifying power. This is due to its ability to mimic the ordered aggregation of water and oil in natural systems: the liquid crystal structure.

In this manner, extremely fine and very stable emulsions are obtained, with the oil droplets surrounded by bi-layers of amphifilic molecules which strengthen the interface stability, thus avoiding the coalescence. With OLIVOIL AVENATE EMULSIFIER®, the concepts of skin- compatible liquid crystals and skin water-management becomes a reality. The hydro-lipidic balance of the skin, which is significantly lowered by traditional emulsifiers, is only barely altered. The increased capacity of the skin to retain moisture, after the application of an emulsion realized with Olivoil Avenate Emulsifier can be determined. Furthermore, the lipidic moiety of the Olivoil Avenate Emulsifier, thanks to the relevance of saturated and unsaturated fatty acids from olive oil, can provide a significant contribution to the anti-aging effect of the whole cosmetic product.

The product comes in solid waxy blocks with a characteristic odor and ivory white color. It is suggested the addition to the oil phase of cosmetic emulsions. Having a melting point within the range 62-67 °C, it may require heating up to 70 °C for addition. The operating parameters in the emulsification phase (time, speed, cycles of stirring and homogenization) have to be defined by taking into account the specific equipment characteristics.

COSMETIC APPLICATIONS
OLIVOIL AVENATE EMULSIFIER® can be used in a wide range of skin-care products, it should be underlined that it represents the best choice to formulate performing cosmetic emulsions, suitable for sensitive and delicate skin (dry skin, baby skin, ethnic products). is useful to build-up anisotropic lamellar phases O/W from vegetable oils, by means of totally natural ingredients. Emulsions with very pleasant white appearance and characteristic soft-touch, stable at high temperature, without addition of co-emulsifiers, can be obtained. Their outstanding skin-feel is a very important ‘marketing plus’: immediate perceptions of skin smoothness, softness and silkiness are easily noticeable during and after application.

Evaluation of skin parameters
The evaluation of sensory skin parameters was carried out following a randomized half-face test protocol by a panel of 20 subjects. They were using an emulsion containing Olivoil Avenate at 2.7%.
This molecule is the key-player in the emulsifying system OLIVOIL AVENATE EMULSIFIER®. The test sample was applied twice daily on one side of the face, in comparison with an emulsion where the Olivoil Avenate® structure was replaced by Cetearyl Glucoside, on the other side of the face, for 5 consecutive days. Test results are given through the answers of the panellist to a set of questions regarding the sensorial skin parameters on a 0 to 10 scale.

APPLICATIONS %
General cases : between 3 and 10% in skin care products (O/W emulsions).Amounts from 5 to
10% are suggested to reach thick emulsions; while 2 to 5% is usually necessary to obtain fluid
emulsions (with water phase gelification). pH range: the optimum stability is between 5 and 7
values.
OLIVOIL AVENATE EMULSIFIER has the ECOCERT certification.